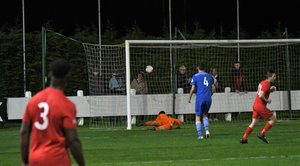 Denbigh Town remain undefeated and did our goal difference a power of good with a dominant display against Rhydymwyn.. Disappointing to let in two goals in the second half but the good crowd of 325 enjoyed seeing so many goals in a 11 - 2 win.

Although the visitor's defence looked a bit nervous at the start the first ten minutes or so seemed pretty even. Rhydymwyn looked as if they wanted to score every time they pressed and we thought we may have a game on our hands but as soon as Lee Davey scored with a long, low shot that was it, the visitors seemed resigned to a defeat. Mark Roberts, Jake Walker and Davey wanted more and were full of running up front. Five minutes later Robbo blocked a clearance and layed it off to Sam Tate who sent in a delightful cross over the defence. Davey had to stretch a bit but this made it more spectacular as his diving header went high into the corner of the net to make it 2 - nil. Ten minutes later Robbo scored with a sweet low shot [ see pic. ] and just a minute or two later Jake Walker scored a spectacular goal as a long ball over the top bounced in front of him and he hit a half volley high into the roof of the goal. Sion Jones,our right back,enjoyed his goal after he joined the attack and found himself on a one on one with the keeper and as he came rushing out to block at his feet Sion cleverly chipped the ball into the net. Robbo scored another and our strong centre half Stuart Jones bagged two headed goals in a now typical fashion from corners. 8 - nil at half time.

The crowd wondered what Rhydymwyn would do to stop the onslaught in the second half and when the very industrious Sam Tate scored almost straight away to make it goal number nine a few people seemed to squirm in their seats with embarrassment whilst still fascinated by Rhydymwyn being put to the sword. . There was at least forty minutes left so how many goals were Denbigh going to score ?

Certainly the dynamics of the game changed and very much to their credit the visitors were giving it everything now. Rhydymwyn scored twice with Jake Walker and Sam Tate notching up more goals before the whistle. Final score Denbigh Town 11 - Rhydymwyn 2.

What a game to watch for the Denbigh supporters, no pressure and a lot of goals to enjoy. Some top performances and I thought Mark Roberts, Lee Davey and Sam Tate were exceptional with all three working very hard and so full of running.

We asked manager Dewi Llion what he thought and replied " I thought we dominated straight from the off and in the first half we were clinical with everyone on top of their game. I am disappointed to let in two sloppy goals to be honest but no manager can grumble after winning 11 -2! Good result."